This study aims at combining time and quantity of carbohydrate (CH) intake in the definition of eating patterns in UK adults and investigating the association of the derived patterns with type 2 diabetes (T2D). The National Diet and Nutrition Survey (NDNS) Rolling Program included 6155 adults in the UK. Time of the day was categorized into 7 pre-defined time slots: 6–9 am, 9–12 noon, 12–2 pm, 2–5 pm, 5–8 pm, 8–10 pm, and 10 pm–6 am. Responses for CH intake were categorized into: no energy intake, CH <50% or ≥50% of total energy. Non-parametric multilevel latent class analysis (MLCA) was applied to identify eating patterns of CH consumption across day-time, as a novel method accounting for the repeated measurements of intake over 3–4 days nested within individuals. Survey-designed multivariable regression was used to assess the associations of CH eating patterns with T2D. Three CH eating day patterns (low, high CH percentage and regular meal CH intake day) emerged from 24,483 observation days; based on which three classes of CH eaters were identified and characterized as: low (28.1%), moderate (28.8%) and high (43.1%) CH eaters. On average, low-CH eaters consumed the highest amount of total energy intake (7985.8 kJ) and had higher percentages of energy contributed by fat and alcohol, especially after 8 pm. Moderate-CH eaters consumed the lowest amount of total energy (7341.8 kJ) while they tended to have their meals later in the day. High-CH eaters consumed most of their carbohydrates and energy earlier in the day and within the time slots of 6–9 am, 12–2 pm and 5–8 pm, which correspond to traditional mealtimes. The high-CH eaters profile had the highest daily intake of CH and fiber and the lowest intake of protein and fat. Low-CH eaters had greater odds than high-CH eaters of having T2D in self-reported but not in previously undiagnosed diabetics. Further research using prospective longitudinal studies is warranted to ascertain the direction of causality in the association of CH patterns with type 2 diabetes. 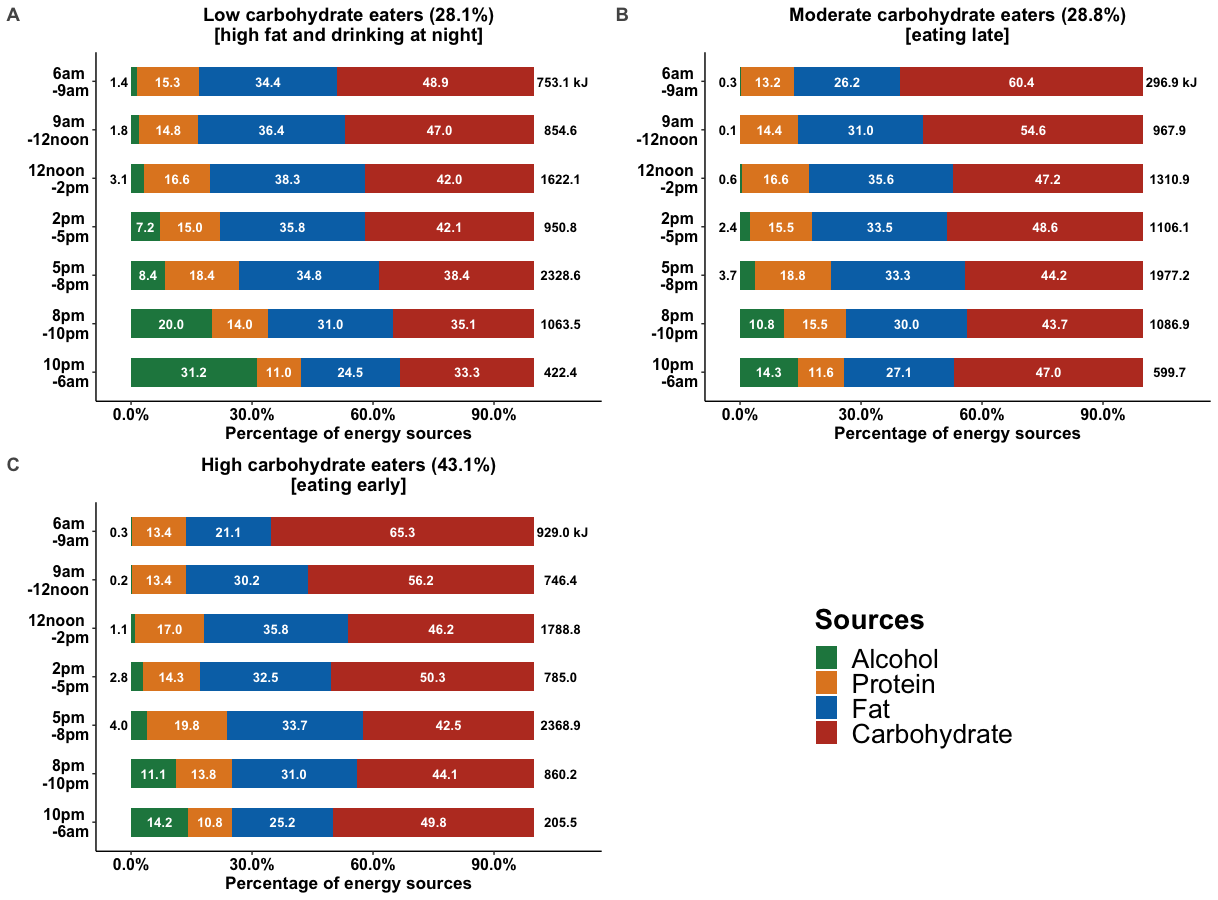