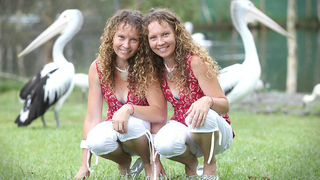 Paula and Bridgette Powers are identical twins from eastern Australia who do the most extraordinary thing. They choose to speak at the same time. The pair has have spent almost every day of their lives together. They are in their 40s now . and they share a passion for seabirds. They set up the Twinnies Pelican and Seabird Rescue refuge off the Sunshine Coast . and they went into a studio in Perth to tell me about themselves. Here they both are.

I mean, you talked talk about having a twin language when you were little, but the way you speak now is amazing. , in unison like that.

YesYeah, it does happen just happens naturally . and people think that we put it on but we don’t. Not rightNo way. Actually , we both got this the flu at the moment . and we are on the same antibioticsanabolics.

What? Do you always get the same illness illnesses at the same time?

What? Right back to when you were little?

Yes, that’s right. I had had my appendix out, and then Bridgette had her appendix out two weeks later.

Wow, . So it that was, so that’s Paula to have who had the appendix out first.

Yes, . That’s right. And then I I’ll have to suffer for two weeks.